Read alumni Jason Spender’s latest update from his time with the Community of St Anselm. Since graduating from the Theology Youth Work and Ministry course at NTC Jason has been spending ‘a year in God’s time’ which has seen him journeying across the UK and Europe, serving, worshiping, and developing in his faith.

Seeds have been planted. Much has been learnt.

I am now in my final week here at Lambeth Palace with the Community of St Anselm. In some ways it feels that 10 months have flown by, however, it also feels that I’ve learnt and gained so much over the past 10 months that it feels like we’ve been here longer.

In the month of April I had the opportunity to go on a 30 day Spiritual Exercises Silent retreat in Switzerland. This really was unlike anything I have ever done (Apart from a week long Silent retreat back in November). Most days there were 3 services, alongside 4 different slots for personal prayer, each an hour long. For these 4 slots of prayer we were given different texts from the bible to meditate on. 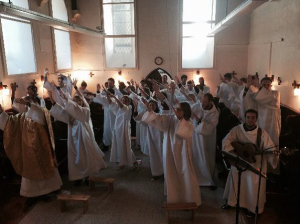 Despite having the opportunity to be ‘hidden’ away in the Swiss mountains, the hardest challenge was learning to quieten the internal thoughts and voices in order to make space to listen to God and pray. One thing I have learnt from this experience is the importance of making space for God, because I find that so often I drown out the internal by external noise.

After returning from Switzerland and re-adjusting to ‘normal’ life, many many things have happened over the past 2 months. We had the chance to go back down to Cornwall and take part in another retreat, this time focused on ‘working life.’ I have also had the opportunity to attend many exciting events such as the ‘Thy Kingdom Come’ Event at St Pauls Cathedral attended by 2000 people, that was part of an initiative by Archbishops Justin and Sentamu.

Last week we had our ‘Commissioning’ service, that was focused on ‘sending’ us back out to what God has called each one of us to. Archbishop Justin gave a moving homily in response to the texts of Genesis 12:1-9 and John 6:1-14, speaking of being sent out and on a journey of faith. 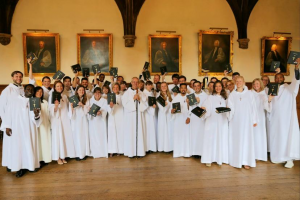 It has been a real blessing and privilege to be a part of the first year of the Community of St Anselm. New friendships have been formed. Seeds have been planted. Much has been learnt. Although the next stage of my journey isn’t clear right now, I’m believing that God will guide me in the right direction.

This year would not have been possible if it were not for your support, both in Prayer & Finance, for which I am very grateful and pray that God would bless you richly in return!